College Students Find the Silver Lining in a Pandemic 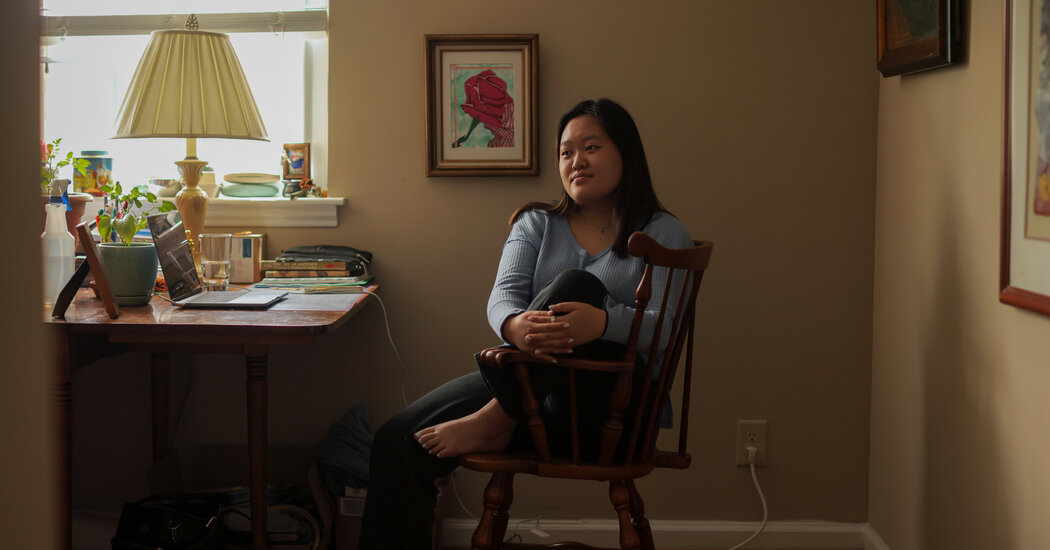 It was the year of college without the college experience.

No packed stadiums and arenas. No intimate, small-group seminars or serendipitous encounters with strangers. No (or fewer) ill-advised nights of beer pong and partying.

It is not likely, if given the choice, that many college students would opt for the past year of distance, separation and perpetual wariness. Still, perhaps surprisingly, for many students, there was much that was gained, as well as much that was lost, in their unwanted suspension of campus life during the coronavirus pandemic.

Madison Alvarado, who graduated from Duke University this month, could no longer enjoy the camaraderie of painting herself blue and the giddy tumult of Duke basketball, which to her was as much about community as sport. As companies stopped hiring last summer, she snagged a summer internship only at the last minute, and was still job-hunting this year.

But she is grateful for an invaluable lesson in dealing with how unpredictable life can be.

“I was the person with a plan,” she said. “A lot of people are following a preset track — pre-med, financial analyst, Ph.D. The pandemic put that in stop mode. It’s made me realize that not knowing the next step doesn’t mean my world is going to crumble. I think it made me less scared to face the unknown.”

At the end of this most unusual of academic years, students interviewed at colleges around the country said they would not miss the regimen of virus testing and quarantining, the classes on Zoom, the zero tolerance for straying from prescribed rules, the distance they felt from one another.

“It’s just been a lot of grieving almost — grieving what we could have had,” said Raina Lee, a freshman at the University of North Carolina, who started the year in a dormitory, but almost immediately had to move to an apartment off campus because of a Covid outbreak. “My life physically became a lot smaller, just this apartment.”

At Colby-Sawyer College in New Hampshire, Samantha Mohammed, a junior, and her roommate were kicked out of college housing for violating quarantine by going grocery shopping a day or so after they returned from winter break, and they forfeited thousands of dollars in housing fees, Ms. Mohammed said.

She said they had thought their mandatory quarantine period had not yet begun, because it was still move-in time. She believes that another student recognized them and reported them.

“It was just such a toxic environment, because everybody wanted to tell on everybody for everything,” Ms. Mohammed said.

Steven Grullon, in his last year of architecture school at the City College of New York, missed being able to go into his studio on campus at any hour of the day or night, the kind of freedom to explore their world and campus that many students used to take for granted.

The architecture building, where he formerly could work and stay over at night when he wanted, was closed for the pandemic. Instead, he often rose at 3 a.m. to make drawings in the apartment he shares with his mother and grandmother in the Bronx. He gained in focus but lost in connectedness. He also regrets the job prospect that went away because of the pandemic last summer.

But for many it has also been a time of self-discovery. Some applied themselves to academics in a way they never would have if offered the familiar buffet of campus amusements. Some bonded with a tight group of friends. Many, like Ms. Alvarado, found that for the first time in their lives, they had been liberated from their carefully planned lives and their focus on getting the approval of others.

For some, their college or university became a sanctuary, even more of a safe place than their homes. Several students said their families or close relatives had become sick with Covid-19, a fate they escaped by being at school and following strict protocols of social distancing and frequent testing.

One of Ms. Lee’s friends at Chapel Hill, Montia Daniels, tried to find strength in her network of activist friends. Ms. Daniels is co-president of the Campus Y, a social justice group, but said that Covid-19 had made it harder for students to find support in one another’s company at a time when they were traumatized by the police shootings of Black people, and by hate crimes against Asian-American people.

She missed being able to go to Meantime, a campus cafe, where students hang out and talk. “I think it’s been difficult for everybody,” Ms. Daniels said. “Being a Black and brown student especially at Carolina can be isolating, and to do that in a pandemic, it can be more difficult to find a community.”

Students often created elaborate rules for themselves. Jacqueline Andrews, who just graduated from the University of Southern California, agreed with her seven roommates that significant others had to test negative for the coronavirus within “a couple of days” of entering the premises. Friends could visit, but only if they sat around the fire pit in the back of the house. The housemates were not allowed to ride in cars with people outside of their bubble.

Because of those rules, Ms. Andrews’s campus social circle has shrunk dramatically. As an art major, she used to know everyone in her major, because they would meet during studio time. But she is delighted to have made non-college friends while roller skating in her neighborhood, known locally as the El Salvador Corridor, meeting people she might not have been as open to if not for the pandemic. She makes roller skating dates via Instagram with a couple of teenage girls who live nearby.

Xanthe Soter, a junior at Temple University, said she “thrived” academically this year, because there were so few distractions, and because she was able to manage her time more efficiently. “I had my best semester,” she said. “I didn’t have to worry about the little tidbits of getting up, getting dressed, going in person — it was very draining.”

Ms. Soter rented an apartment with three classmates in Philadelphia, and said they all had regrets about missing out on the wild side of college life but felt they all gained a lot, too. “I don’t want to say we are adults now, but we definitely have grown up,” she said. “No more young, dumb and fun type of lifestyle.”

Dominic Lanza, a computer science major at Temple, said he and the five men he roomed with began holding “family dinner night” every week with an intimate circle of friends, a routine that impressed on him how precious their connection was.

“You can’t go out and have fun anymore, but in another way we all have become a lot stronger friends,” he said. “We all, I think, have been very introspective and reflective on what made college fun, and honestly, now when I get to see my friends — we’re moving into a post-pandemic world — I’m more grateful for those experiences. When my friends come over, I’m going to cherish this a lot more than I would in a prepandemic world.”

Ms. Lee of U.N.C. called the pandemic “a portal” to other concerns, like racial justice and inequality.

Like many others, she said the pandemic had mitigated her obsession with getting good grades, as schools allowed more courses to be taken pass/fail, and as professors became more lenient with grading. Unable to go out, she started embroidering and cooking, discovering that she had talents outside of academics.

Ms. Andrews, the art major in California, said she missed her too-busy pre-Covid campus life, but said the pandemic had forced her to slow down, if only because there was not as much to do. She had been getting more sleep and her life had, in many ways, become healthier, she said. “I used to feel guilty if I didn’t get much done. Now I have time to explore other things, take care of myself.”

For some, the loneliness was almost unbearable.

Biling Chen, a chemistry major at Hunter College in New York City, chafed at not being able to meet her professors, and said many of them gave online lectures in which they were “talking to themselves, nonstop.”

As an international student living alone, she has felt painfully isolated. “It’s like I live on an island,” she said.

Many colleges restricted on-campus socializing to small groups of students housed together, which made for a kind of exclusivity, said Maria Gkoutzini, a freshman at Williams College. “Friendships were a lot more cliquey,” she said.

“The most difficult thing for me was just knowing that that’s not how it usually was, but not being able to picture anything other than that, because that’s all that any of the first-years knew,” she said.

Almost everyone said they had changed their outlook on careers and the future. Getting ahead no longer seemed as urgent, the path less clear. Julia Petiteau, Ms. Soter’s roommate and a marketing major at Temple, said she knew students who had lost internships during the pandemic summer and taken jobs at supermarkets or Home Depot just to fill the gap. Now jobs are opening up, she said, “but it’s tough to put an internship that got canceled on your résumé.”

Many students, especially at elite schools, took a gap year rather than face the uncertainty of college in a pandemic. And for some of them, the timing was just right: For all the celebration of campus life, the college experience even before the pandemic had included a certain amount of insecurity and anxiety.

Griffin Wilson, a sophomore at Yale, said the pandemic saved his mental health by allowing him to take a year off without formally asking for a mental health leave. His freshman year, he had been paralyzed by perfectionism and anxiety, he said. The break had allowed him to recover enough to feel comfortable returning in the fall. “Covid, horrible as it is, honestly saved my life,” he said.

Speaking from 400 miles into the Pacific Crest Trail, as she hiked from Mexico to Canada, Mimi Goldstein, who would have been a sophomore at Duke, said her gap year had made her let go of her many security blankets. “I think a little time and distance made me realize how much energy I spend jumping through other people’s hoops.”

The pandemic had a paradoxical side, she said. “This is definitely a dark spot in American history, but personally, it’s been a good shake-up,” she said. She had dropped out of her sorority. She was thinking of changing her pre-med major to global cultural studies.

She said she was still figuring things out. “There is a very, very real chance my parents will kill me,” she said.