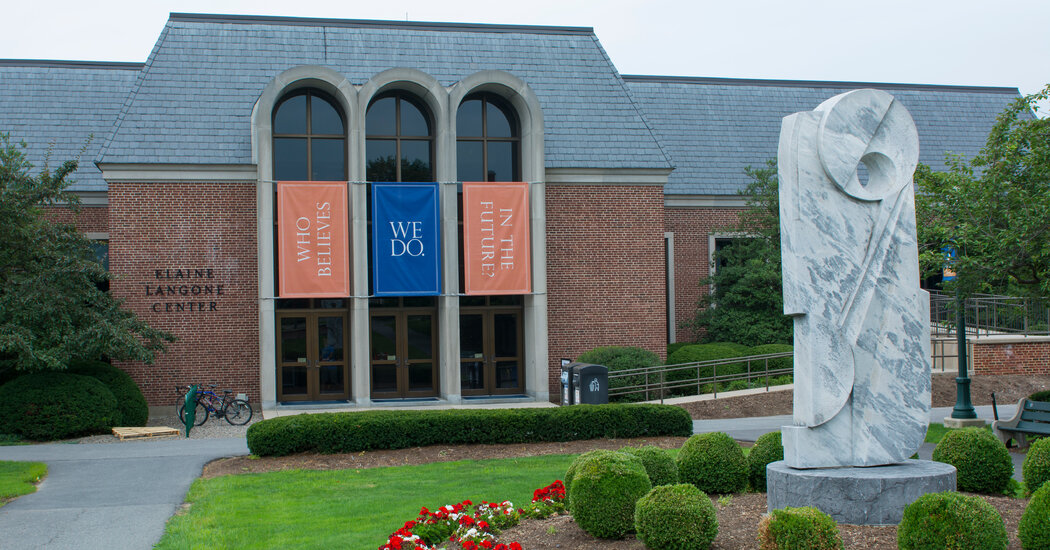 Officials at Bucknell University have ordered an investigation into what they described as a “horrific” episode of harassment targeting residents at a house for L.G.B.T.Q. students on its campus in Lewisburg, Pa., last week.

In a letter to students, the university said a group of men “harassed and intimidated” residents of Fran’s House, an affinity house for L.G.B.T.Q. students, and tried to break into the building on Thursday night. In interviews, residents said they were terrified and traumatized by the episode.

“It is clear from multiple accounts that the students violated the physical space and, far more importantly, the residents’ sense of place and security,” the university’s president, its provost and an associate provost wrote in the letter, dated Friday. “We cannot erase the ugliness and subsequent trauma of last night’s transgression against the students of Fran’s House and, implicitly, many others, but we can commit to addressing it in a way that protects L.G.B.T.Q. Bucknellians.”

Tyler Luong, a junior who is a resident assistant, said he was in his room at Fran’s House studying for a final exam when someone texted a house group chat thread warning residents to lock their windows and doors.

He rushed to an upstairs bathroom where, he said, residents who had crowded inside were holding a window closed. People outside yelled “Let us in.”

Someone saw a man urinating on the front porch. Others banged on a metal flagpole outside and pounded on the front door, screaming “Let us in, this is our house,” a witness said. One student said that about eight people climbed to the roof.

Mr. Luong called the university’s public safety department, but by the time its officers responded, all but four of the 15 to 20 people who he estimated had initially tried to enter the house had fled. The officers did not speak to him or other residents, he said, and instead spoke with the remaining intruders, “shaking hands with them, reminiscing about what it felt like to be a handsome young man with hair in college.”

“You know, it was kind of ridiculous,” he said.

The department referred a request for comment to the university’s communications division. A university spokesman declined to comment on Sunday, citing the investigation.

In their letter to students, the administrators said that the public safety department’s response “was lacking in myriad ways” and that the university had hired a firm to investigate and “implement corrective and disciplinary measures as appropriate.” The university, they said, had also hired a firm to investigate the harassment allegations raised by residents of Fran’s House.

Mr. Luong said that many residents slept in their friends’ rooms on Thursday night, terrified that the intruders would return. He added that he slept with a sharp object under his bed that first night.

Carolyn Campbell, a junior who is an affinity leader of Fran’s House, said she and her housemates were “very much still shaken up and processing” the episode.

“This was especially traumatic for a lot of us to deal with,” she said, “because we never thought that something, like, so overtly horrible could happen to the house like this to strip away the sense of safety.”

Until two years ago, the Fran’s House building, also known as Tower House, was home to Bucknell’s chapter of the Tau Kappa Epsilon fraternity. The university banned the fraternity for hazing violations that included underage drinking, the use of dog shock collars on members, the throwing of darts at members and other activities “creating a reasonable likelihood of bodily injury.”

The Fran’s House residents who witnessed and reported the harassment on Thursday said they recognized the instigators as seniors who were part of the now-banned fraternity.

The Bucknell community quickly rallied in support of Fran’s House, the students said. One professor organized people to stand guard outside the house in shifts from 5 p.m. to 3 a.m. in the days after the episode. A march against toxic masculinity was organized.

“Knowing the breadth of support, I hope, will hasten the return of safety for the residents of Fran’s House — but time to heal and feel safe in their home will be needed,” Bucknell’s office of L.G.B.T.Q. resources said on Instagram.

In a letter to the Bucknell community, Fran’s House residents thanked students, staff members and alumni for the support they had shown, and asked that Tower House be made the permanent home for Fran’s House and L.G.B.T.Q. students on Bucknell’s campus.

“Never again,” the letter said, “should someone feel entitled to come to our home and say it’s ‘their house and not ours.’”