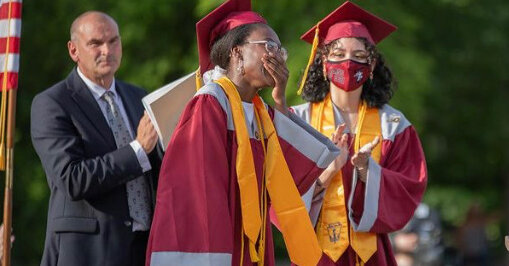 She was bound for Harvard, which had agreed to pay her tuition and room and board. Her 4.9 G.P.A. had qualified her for other scholarships that would cover college expenses.

Still, her guidance counselor urged her to go for it, telling her she had worked hard and deserved the award known as “The General Excellence Prize.”

Ms. Tetteh, 17, applied, figuring that the scholarship, which every year goes to one male and one female student selected by a committee of teachers, administrators and guidance counselors, would probably go to someone else.

Then, during her graduation ceremony from Fitchburg High School on June 4, the assistant principal announced she was the winner. Ten minutes after she accepted it, she walked back to the podium and apologized for interrupting the ceremony.

“I am so very grateful for this, but I also know that I am not the one who needs this the most,” Ms. Tetteh said, her voice trembling. “I would be so very grateful if administration would consider giving the General Excellence scholarship to someone who is going into community college.”

Immediately after her speech, her fellow classmates and the crowd at the ceremony cheered and rose in a standing ovation.

Ms. Tetteh said she was flooded with relief.

Robert Jokela, the district superintendent, said that one week after the ceremony, he remained awed by Ms. Tetteh’s spontaneous announcement. The Boston Globe and other local news outlets reported on her speech this week, and it soon gained attention from national newspapers and television networks.

“She walks 30 yards back to stage. She’s walking back like she owns the place,” Mr. Jokela said. “Everybody got it. What we just witnessed was the ultimate in generosity.”

Ms. Tetteh was 8 years old when she moved from Ghana to Fitchburg, a city of about 40,000 people, 50 miles west of Boston. Once a bustling city of saw, paper and cotton mills, Fitchburg began to decline in the 20th century as local owners sold their businesses to national corporations and the paper industry’s dominance gave way to pharmaceutical companies and other manufacturers.

More than 60 percent of the students in the high school are identified by the State Department of Education as “economically disadvantaged,” and 67 percent are described as “high needs.”

At Fitchburg High, a public school, 75 percent of the roughly 1,300 students are students of color, said Jeremy Roche, the school principal. At least 40 percent of those students go to community college when they graduate, he said.

“A lot are first-generation students,” Mr. Roche said. “A lot of them are students who are the first to graduate high school in their family.”

He added, “There are many families here who work really hard and don’t make a lot of money.”

When Ms. Tetteh was 9, her mother, who provides care for people with disabilities, enrolled in Mount Wachusett Community College in Gardner, Mass.

Her mother, Rosemary Annan, was working 80 hours a week but decided to pursue an associate degree in science, hoping it would help her get a job that would support her four children and help reduce her hours.

“She realized that there is a lot of opportunity if you’re educated,” Ms. Tetteh said.

Her mother’s efforts inspired Ms. Tetteh, who came to the United States knowing little English but already eager to excel at school.

She arrived at school early and stayed late to improve her English and participate in enrichment programs. Her mother regularly took her to the library, and she became an avid reader.

When she got to high school, she helped start a welcoming committee for immigrant students, Mr. Roche said.

Her fellow seniors chose her as class speaker at the graduation. In her speech, which she gave just before she was awarded the scholarship, she spoke of the richness of her school’s diversity and the resilience of her classmates.

“Some of us were born with the odds stacked against us, that we may not make it to today,” Ms. Tetteh said. “I have gotten to know so many of you these past four years and there is so much potential in our class.”

Her decision later to sacrifice the scholarship was overwhelming, but not shocking, Mr. Roche said.

“I was not surprised that she did that because that’s who she is,” he said.

Ms. Tetteh, who plans to major in chemistry and wants to become a doctor, said she would like to start a separate scholarship for students who are immigrants and cannot afford college.

For now, she and Mr. Roche have been working on how to redistribute the scholarship money she gave up, an annual gift of $10,000 that is renewable for four years.

The plan so far is to award it two students who need help paying for community college.

“I think that all types of different students go to community college,” Ms. Tetteh said. “The common theme is that they want to get an education, they want to better their lives and that is something that is so commendable.”