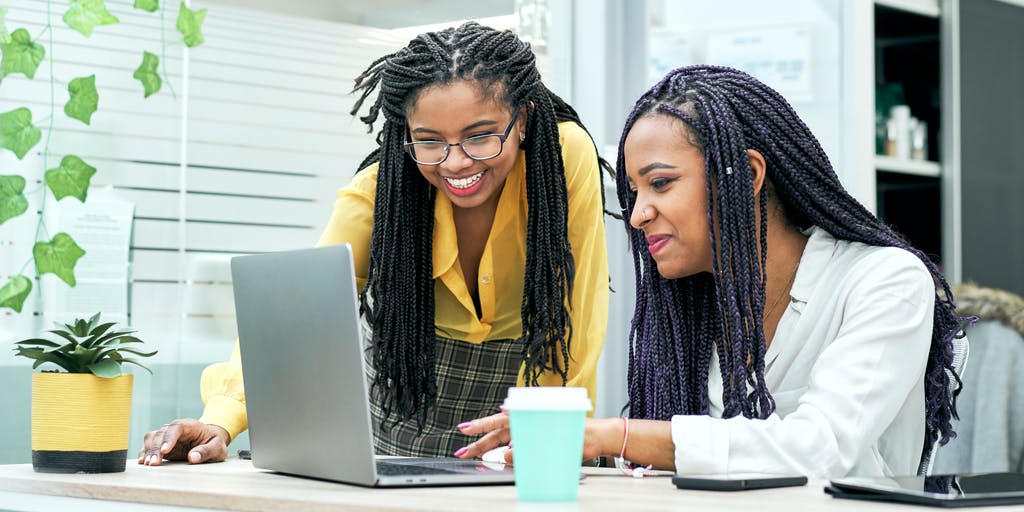 For decades, companies have offered more or less the same deal to Americans in search of office jobs: You pay for your own higher education and skills training, and then we’ll consider employing you.

But with corporations unable to hire and hold on to enough workers to fill jobs in IT, cyber security and software development, a shift may be underway. More companies are assuming the costs and risks of preparing people for entry-level technology roles by offering apprenticeships.

The model combines paid on-the-job training with classroom instruction. Although such apprenticeships have long been available in Europe for a variety of professions, in the U.S. they have mostly been reserved for the skilled trades.

“Apprenticeship as an alternative to education is something that might be starting to pick up a little bit of traction, but it’s certainly not the same as what you see in other countries,” says Kelli Jordan, director of IBM career, skills and performance.

Employers are counting on a few key selling points to attract Americans to these “white-collar” or “new-collar” apprenticeships. They’re designed to help people kick off careers in growing industries that pay well above minimum wage. They operate according to standards set by state governments or the U.S. Department of Labor. They often culminate in a certificate or college credits.

And unlike college programs and coding bootcamps that charge students money, apprenticeships do the opposite: They pay wages.

“An apprentice is an employee,” says Jane Oates, president of the nonprofit WorkingNation and former assistant secretary for the Department of Labor Employment and Training Administration. “Apprenticeships aren’t to train someone so they can get a job—an apprenticeship is a job.”

Some employers, like IBM, run their own tech apprenticeships, while others hire apprentices through providers including Woz U—a company started by Apple co-founder Steve Wozniak—and Multiverse, a British company that recently raised millions of dollars to expand to the U.S.

The message he’s receiving from client companies? “Make this as open and available as possible.”

The Rise of Technology Apprenticeships

The number of U.S. registered apprenticeship programs grew 73 percent between 2009 and 2019. Those designed for skilled trades—like electrician, carpenter and plumber—have, by far, the most participants. Information technology offerings account for just a small fraction of programs.

Recent government support may signal new momentum for expanding apprenticeships beyond the fields that traditionally offer them, though. In February, the House of Representatives passed the National Apprenticeship Act of 2021, a bill that would invest billions of federal dollars in apprenticeship programs if it became a law. In April, the Government Accountability Office published a report that recommends that employers develop apprenticeship programs to help workers weather economic disruptions.

There’s been new private investment in the concept, too. Multiverse—founded in London in 2016 under the name WhiteHat by the son of a former U.K. Prime Minister—reported in January raising $44 million to bring apprenticeships in data, software engineering, digital marketing and project management to the U.S. Multiverse pitches its apprenticeships, which last 12 to 18 months, as an alternative to both traditional college and corporate training.

As a company that recruits and trains apprentices on behalf of other employers, the Multiverse model resembles that of Techtonic, a Colorado company that has trained aspiring software developers since 2016. Techtonic raised $6 million in 2019.

A similar Woz U program trains students for several weeks before placing them in 12-month apprenticeships at companies. (Woz U has shifted its focus since it was founded in 2017. It started out as an online coding school that charged students for its services, but that program shuttered in 2019 after the company reached an agreement with the state of Arizona to give up its license.)

Multiverse and Woz U declined to comment about their corporate clients. In marketing materials, they highlight partnerships with major brands including Facebook, Morgan Stanley, Citi, Microsoft and Wells Fargo.

This staffing-agency-style system of training workers for placement elsewhere is “really promising,” says Oates, who thinks it could benefit smaller companies less able to create their own registered apprenticeships.

In contrast, tech giant IBM built its own registered apprenticeship program in 2017. It lasts 12 to 24 months and trains apprentices in roles that include cloud storage engineering, software developing and technology sales. By May, the company will have trained about 700 apprentices, and each year it aims to hire 400 more.

Benefits For Companies, and For Workers

Corporate leaders have been lamenting the so-called “skills gap” for at least the last decade. They’ve tried several strategies to recruit and retain workers who have specific technical and interpersonal abilities.

Some companies run corporate training programs, like the Amazon Technical Academy, which just expanded to offer programs through two coding bootcamps to people who don’t even work for Amazon. Others offer tuition support for college courses, either through their own partnerships—like the one Starbucks has with Arizona State University—or by contracting services out to third-parties that work with degree providers.

Still, companies report that they can’t fill open IT positions. That has led more employers to think about “building” talent rather than searching for it, Coleman says, adding, “The same employers who expect the burden of education to be on the candidates, they’re realizing they’re not getting enough qualified people to apply.”

Woz U client companies view apprenticeships as a way to have more control over what skills their employees possess, according to Coleman, who says the mark of a successful apprentice is not her credentials or experience but that she can “demonstrate ability to do this task today.”

Companies willing to train promising-yet-inexperienced apprentices could create pathways to tech jobs for people who don’t have college degrees. And the potential for apprenticeships to diversify the tech industry is a key message that providers like Woz U and Multiverse use to market their services. For example, over the past year, Woz U has shifted from recruiting job seekers who have associate degrees to now also accepting those who have only high school diplomas.

“It brings different people into the world of software development—sometimes by age, but most often by academic background,” Oates says.

For job seekers, the biggest draw of apprenticeships may be the pay. Starting salaries for Woz U apprentices range from about $35,000—about the median annual income for a U.S. worker—to $50,000, plus benefits. And apprentices typically get wage bumps as they demonstrate progress.

Of course, companies and workers only stand to benefit from apprenticeships if people sign up for them. Because the model is not familiar to many Americans, marketing these “earn and learn” opportunities is a challenge.

Multiverse is doing outreach through Instagram and other social media networks. It’s also working with organizations that have ties to communities underrepresented in the tech industry.

One of them is Generation USA. The five-year-old nonprofit recruits people—mostly low-income—to participate for free in job training and coaching programs in more than a dozen cities. During its “bootcamp,” Generation USA invites line managers from companies that seek tech apprentices to explain how the entry-level roles actually work and what a day on the job is like.

“Apprenticeships, for many of our learners—they don’t see it as full-time employment. They’re not aware of what the apprenticeship model fully entails,” says Armand Latreille, a fellow at Generation USA. “Apprenticeships are absolutely paid, at an hourly rate on par with the department average. That’s one of the things we have to demystify, session one.”

Latreille believes that teaching more people about, and preparing them for, apprenticeships is the first step toward helping them start successful careers in the tech industry.

“By the time they get there, we’re pretty confident that the learner—who in another universe would not have access to that opportunity—is the right person for the job,” Latreille says. “That’s a game-changer for an industry that has been stuck in hiring and operating.”