She spoke up when a professor wronged her. Then Sam Houston State expelled her.

Graduate student Phelan Dickerson has had a long history of difficulties in her Clinical Mental Health master’s degree program at Sam Houston State University. Not one to stay quiet when she sees others wronged, Dickerson has been an outspoken advocate for change within her program.

Now, ignoring its obligations under the First Amendment, Sam Houston has dismissed Dickerson from the program because of her candid attitude. As FIRE has reminded Sam Houston in two letters now, a public university cannot punish students for sharing their opinions, including on social media, even when those opinions may cast the school or the program in a negative light.

Here are the facts as reported to FIRE by Dickerson. Sam Houston State has not contested this account. 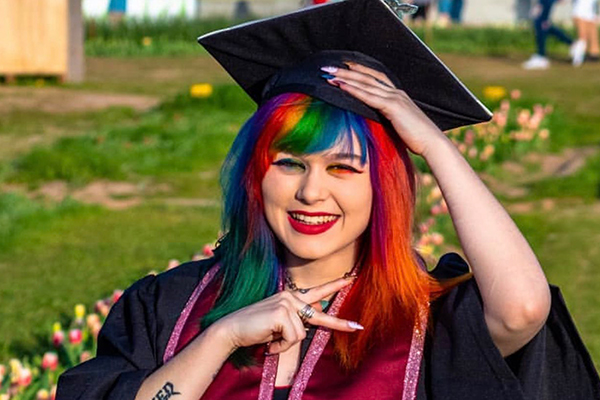 Dickerson found herself a victim of retaliation when, in the fall of 2020, she applied for formal candidacy in her master’s program, but Sam Houston rejected her application. (Photo courtesy of Phelan Dickerson)

When, in the fall of 2019, a professor made a sexually suggestive joke about kissing her, Dickerson attempted to meet with administrators about this professor’s behavior toward her. And in the spring of 2020, Dickerson witnessed a professor applying a classroom dress code policy in what she believed was a discriminatory way, Dickerson spoke up, notifying the associate dean of the situation. That same professor, Dickerson says, appeared to grade male and female students differently for the same work, and Dickerson again voiced her concerns.

Later during the spring 2020 semester, Dickerson’s relationship with certain faculty members became unbearable when Dickerson says one of her professors called her a “worthless cunt.” Dickerson again complained about this comment, and, according to Dickerson, the professor even admitted to the statement in front of administrators.

Instead of the professor being reprimanded, it was Dickerson who found herself a victim of retaliation when, in the fall of 2020, she applied for formal candidacy in her master’s program, but Sam Houston rejected her application. The school’s reasoning? Dickerson didn’t get along well with others. Specifically, her propensity to speak up when she sees wrongdoing had led some faculty members to not care for her.

Like many institutions of higher education, Sam Houston used “professionalism” as a guise for restricting Dickerson’s right to free expression.

Days after posting these tweets, Dickerson was notified that the institution was dismissing her from her degree program.

During the 2020-2021 school year, Dickerson worked through a remediation plan devised by the institution, with the hope of successfully re-applying for candidacy. She assiduously attended regular counseling sessions, met with her academic advisor, and worked on her relationships with faculty — all things she should not have had to do, but was forced to do as a punishment for her somewhat caustic, but nonetheless protected expression.

Her compliance worked. This past March, Dickerson successfully re-applied for candidacy. She was now officially a master’s candidate in Sam Houston’s Counselor Education program.

However, the détente between Dickerson and Sam Houston would prove short-lived.

Just a few weeks later, in April 2021, Dickerson discovered that she would be forced to take another course by the same professor who Dickerson says had called her a “worthless cunt.” Frustrated and discouraged by this development and feeling certain that reporting the situation yet again to program administrators would not help, Dickerson went public, taking to Twitter to share her story:

Hey @SamHoustonState – if me and all my fellow grad students witnessed [my professor] call me a worthless cunt, and give us bad grades out of spite and she admitted it to the dean, why are we still forced to take classes with her? Why are there no other options for adv pharma??

It’s complete and utter bullshit that she ADMITTED this unprofessional behavior infront [sic] of me, my advisor, and the dean and my classmates are constantly trying to schedule around her classes so we don’t have her, yet y’all haven’t given her a single consequence[.]

Days after posting these tweets, Dickerson was notified that the institution was dismissing her from her degree program. The only thing that had changed, and specifically referenced by the administration, was her tweets. The university claimed that Dickerson had not shared her complaints through “appropriate channels.”

As FIRE wrote to Sam Houston, these tweets are clearly protected by the First Amendment:

A university cannot require that student criticisms of colleagues, faculty, or administrators be confined to private fora. If it could do so, a broad range of student speech on other important concerns would be subject to punishment because it was shared with others—a trusted friend, colleague, journalist, or the public—instead of going through the university’s preferred ‘channel.’

Dickerson’s final appeal to Sam Houston’s provost is upcoming, and Sam Houston must do the right thing: Abide by the First Amendment and allow Dickerson to take her rightful place as a candidate in its Counseling Education master’s program.