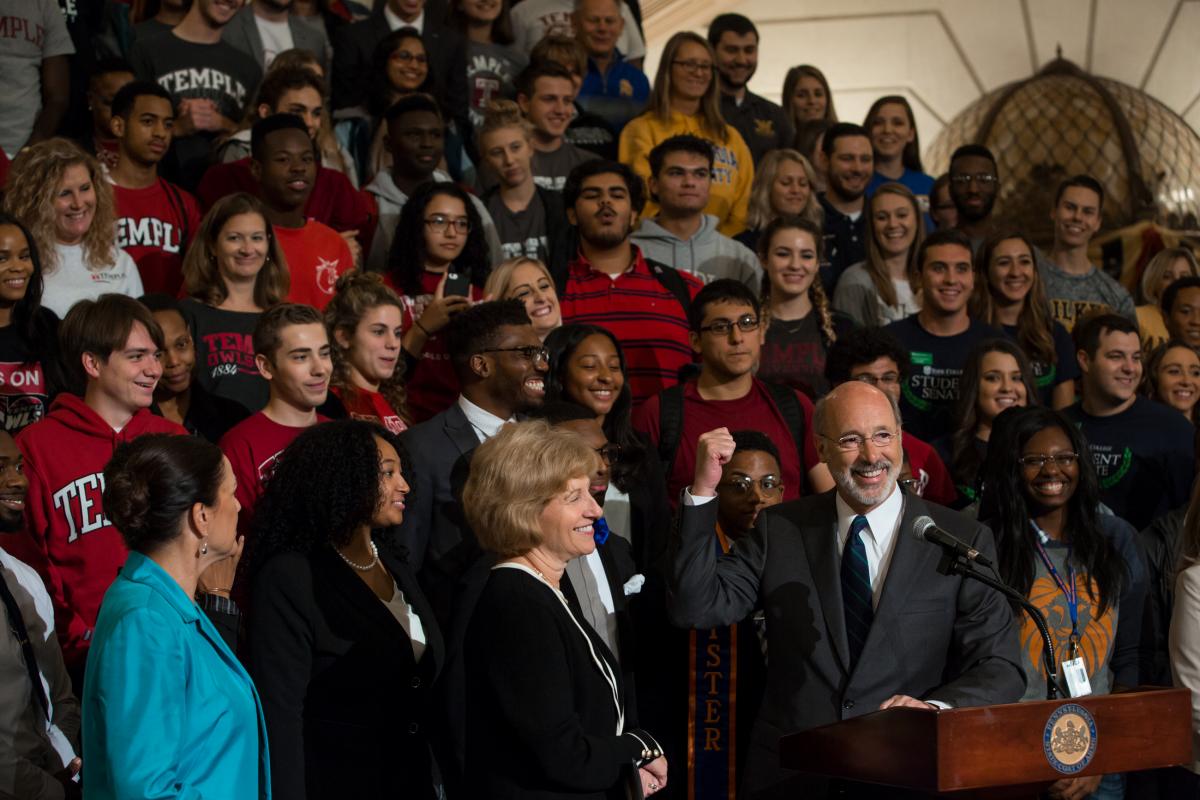 The year 2016 marked a dramatic shift in how federal education officials discussed and enforced polices to prevent and address sexual violence on college campuses and punish perpetrators.

The Obama administration had spent about five years bringing attention to the pervasive sexual violence occurring on American campuses and threatening to sanction colleges that did not respond to reports of assault in a manner focused on protecting and believing victims. Those efforts were upended when Donald Trump was elected and appointed Betsy DeVos secretary of education. DeVos, whose views on campus sexual misconduct ran counter to the work of advocates for victims, quickly began to dismantle the policies of the Obama administration.

DeVos focused on institutionalizing due process rights for students accused of sexual misconduct and rolled back protections for victimized students whose reports didn’t meet certain criteria, adding confusion to the process for reporting sexual assault and harassment and diminishing what little trust had been built with survivors of campus sexual assault during the Obama presidency.

As a result, over the past four years, national debates over these issues devolved into highly partisan disputes and federal lawsuits over Title IX, the law that prohibits sex-based discrimination at federally funded institutions.

In Pennsylvania, however, state lawmakers’ commitment to preventing and promoting awareness about campus sexual violence remained steadfast, according to state higher ed leaders. Governor Tom Wolf launched the state’s It’s On Us PA campaign and grant program, which is a spin-off of President Obama and then vice president Biden’s national initiative to promote campus action against sexual assault.

Since the campaign’s inception in 2016, the state has dedicated about $4 million in grant funding to colleges to combat campus sexual assaults. Public and private institutions can apply annually for grants of up to $30,000 for a range of sexual violence prevention strategies that depend on individual campus needs, said Julie Kane, policy director for the Pennsylvania Department of Higher Education. Seventy institutions have received one of the 150 grants distributed so far, according to Wolf’s office.

Some colleges have used the funding for campus climate surveys that assess students’ awareness of available resources and reporting processes for victims of sexual misconduct and the prevalence of sexual assault on their campuses, or for enhancing student and faculty member training programs on intervening in dangerous situations that could lead to sexual violence, Kane said. The campaign was the first — and Kane believes still the only — state government-run initiative in the country operating an It’s On Us program.

Karina Chavez, executive director of the Pittsburgh Council on Higher Education, a consortium of 10 colleges and universities in the city, said Wolf and It’s On Us PA guided higher education leaders and encouraged them to continue their sexual violence prevention work at a time when the federal government, under the leadership of DeVos, was more focused on overhauling the policies and processes for addressing and adjudicating sexual misconduct complaints rather than on preventing them.

“Over the last number of years, we’ve had at a federal level an unraveling, or a walking back” of policies that protect campus survivors, said Chavez, who is also incoming board president for Pittsburgh Action Against Rape, a local sexual violence prevention organization that provides victims with services.

“When you have a state leader emphasize that this is a priority and then inject state funds into this work, it reminds leaders of what our North Star needs to be, which is doing the best we can in the areas of prevention, training and response,” Chavez said.

The funding is coupled with state mandates requiring colleges and universities to develop web-based anonymous reporting systems for sexual misconduct and to protect victims and witnesses who come forward from disciplinary sanctions if they were drinking alcohol or violating other campus conduct codes at the time of the incident.

Kane said the governor’s office and state education officials are currently gathering support among lawmakers for new proposed legislation related to the It’s On Us program, including a bill proposing affirmative consent or “yes means yes” standards at all Pennsylvania colleges, and a bill that requires dating violence education for middle and high school students. State representatives pledged earlier this month to co-sponsor and propose the legislation “in the near future.”

The overall aim of these efforts is to create consistent sexual violence prevention and education policies across the state, because some colleges have been more proactive than others in establishing practices that support survivors, Kane said. The grants also enable lower-resourced institutions to implement the new requirements.

“It’s one thing to offer grants and say, ‘Hey, this is a great idea, we really think that you should be doing this and here’s some money to help you,’” she said. “It’s another thing when you have the legislative backing to try to get those who aren’t the early adopters … to start moving in that direction.”

Rachel Manson, director of the Women’s Center at Lincoln University, a historically Black university in southeastern Pennsylvania, said multiple It’s On Us PA grants awarded to Lincoln — $30,000 grants in 2016 and 2021 — have allowed campus officials to update, scale up and continue delivering enhanced sexual violence prevention training.

The university invested in phone and web applications that provide online bystander intervention and sexual violence and consent training programs for students, and brought in experts from the Rape, Abuse & Incest National Network to train faculty and staff members on how to respond when students disclose a sexual assault complaint to them, Manson said.

“We understand that behavioral change does not happen like turning off and on a faucet. That’s where education comes in,” said Manson, who is also the university’s director of counseling. “That’s why we have the variety of apps to reinforce the knowledge.”

But the applications are expensive and the university could not have afforded them without the grants, she said, noting the financial hit that Lincoln, like many higher education institutions, took in the last year due to the coronavirus pandemic.

Chavez, of the Pittsburgh higher education council, said It’s On Us PA funds allowed colleges in the area to host trainings on bystander intervention through Green Dot, a research-backed program that teaches people to recognize warning signs that a person is experiencing relationship violence, stalking or sexual violence, and how to interrupt dangerous situations.

Noah Riley, a health promotion specialist at Carnegie Mellon University who leads the university’s Green Dot program, said a $29,000 grant to the university in 2019 funded a multicampus training for 50 college officials and employees in Pittsburgh. Carnegie Mellon now has 20 faculty and staff members trained in the intervention method.

Chavez added that about 100 staff members at the 10 campuses represented by the council were previously trained with support from local nonprofit organizations. But the state grant kept in motion the “massive regional effort” by Pittsburgh institutions to ensure more college staff had the training, she said.

Riley said, “Limited programs and initiatives have been demonstrated to really reduce levels of what we call power-based personal violence.”

“Green Dot was one of those few programs,” he said, adding that it “helped us to continue that journey.”

After the University of Pittsburgh participated in 2015 and 2019 American Association of Universities climate surveys, administrators learned they needed to build more student awareness about the prevalence of sexual violence on campus and university resources available for survivors in order to encourage them to come forward, said Katie Pope, associate vice chancellor for civil rights and Title IX​.

Underreporting of incidents by college students remains a top issue identified by a 2019 multicampus survey conducted by the AAU. The 2019 survey found that about one-third of women at Pitt who said they were penetrated with physical force or were unable to give consent to a sexual act did not contact any university support services. Two top reasons they provided for not reporting the assaults were that they felt the incident “was not serious enough” and felt “embarrassed, ashamed, or that it would be too emotionally difficult,” according to a report about the survey results.

Pope said an It’s On Us PA grant helped fund a campus display as part of the Clothesline Project, a campaign to bring attention to the issue of sexual violence against women that has been staged at many campuses nationwide. Sexual assault survivors are invited to express their experience on a T-shirt, which is displayed for others to see and get a grasp of the pervasiveness of the violence.

“We used those funds, in part, to do some of that awareness-building to help … visually demonstrate the impact of sexual assault on members of college campus community,” Pope said. “The goal is to get the number of incidents to zero. But the reality is that before we can get there, we’ve got to get people to come in and talk about what they have experienced.”​

Kristy Trautmann, executive director of the FISA Foundation, a philanthropic organization based in southwestern Pennsylvania that funds efforts to improve the lives of women, girls and people with disabilities, said the It’s On Us PA campaign has gone beyond just giving dollars to campuses to address sexual violence. Wolf has kept a spotlight on the issue and promoted state and regional collaboration in a nonpartisan way, despite the political polarization of campus sexual assault at the national level, Trautmann said.

“To have the governor’s office really continue to focus year in and year out on sexual violence as a critical public health issue, public safety issue, justice issue, makes a huge difference,” she said.

Kane, the Pennsylvania higher education department official, said the campaign has emphasized and codified protections for Pennsylvania students that many felt were lost with DeVos’s regulatory changes to Title IX, which went into effect in 2020. It maintains a level of consistence for administrators, students, faculty and staff members and other campus stakeholders who have had to make dramatic changes to federally enforced policies in the wake of the DeVos regulations, which the Biden administration has indicated it plans to reverse within the next couple of years, she said.

“If it’s not going to now be part of the federal regulations, then we need to make it part of our state law or regulations,” Kane said. “Ideally, we would have the federal and the state aligned and everyone providing protections. But that’s not the way it is, at least not the way we see it at the moment.”