Gray Associates has begun developing benchmarks on revenue, direct instructional cost, and gross margin by academic program, course, and section. Our first cut at the data, for 100 to 400-level courses in small colleges had some surprising results. A word of caution, these are early results on a sample of schools. As the sample grows, the results may change.

One might expect that teaching English would be relatively low-cost. English professors are often paid less than other professors (e.g., in computer science) and their classes, which are often mandatory general education courses, should be full. As a result, the classes should theoretically have below-average costs per student credit hour (i.e., modest wages divided by lots of credit hours).

The reality is a little different. Theater, Music, English, and French have the highest cost per SCH in our dataset. Programs that are often perceived to be expensive, such as Engineering, have a below-average cost per SCH. Philosophy, a much-maligned discipline, has one of the lowest costs per SCH. 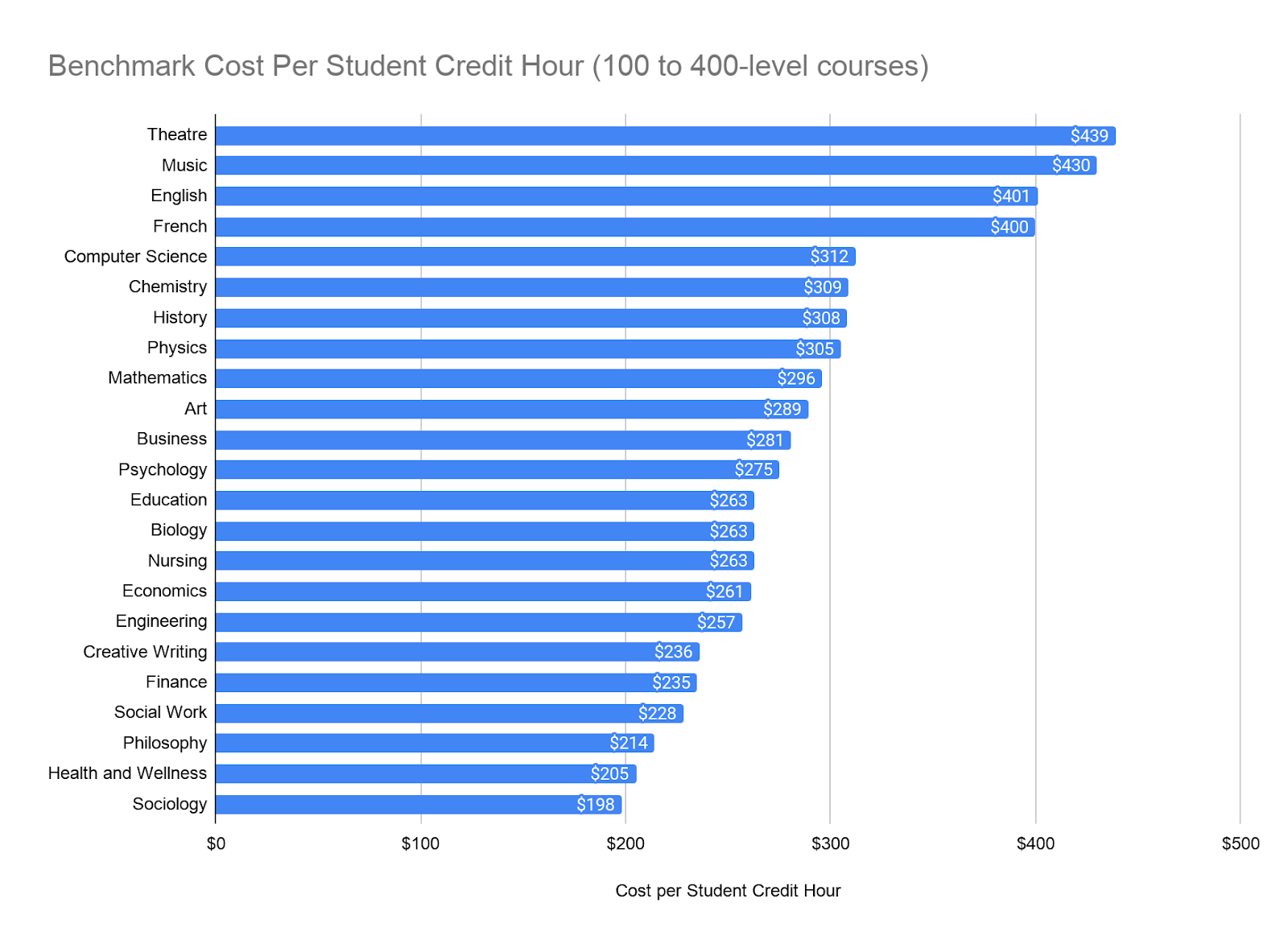 Even if the cost for English is higher, it might still have above-average margins, if revenue per student credit hour were higher. For example, students in English classes might receive less scholarship money than students in STEM programs.

However, Theater, French, Music, and English also have the lowest margins in our dataset. Nursing, often perceived to be an “expensive” discipline, actually has the highest margins, with Finance running a close second. 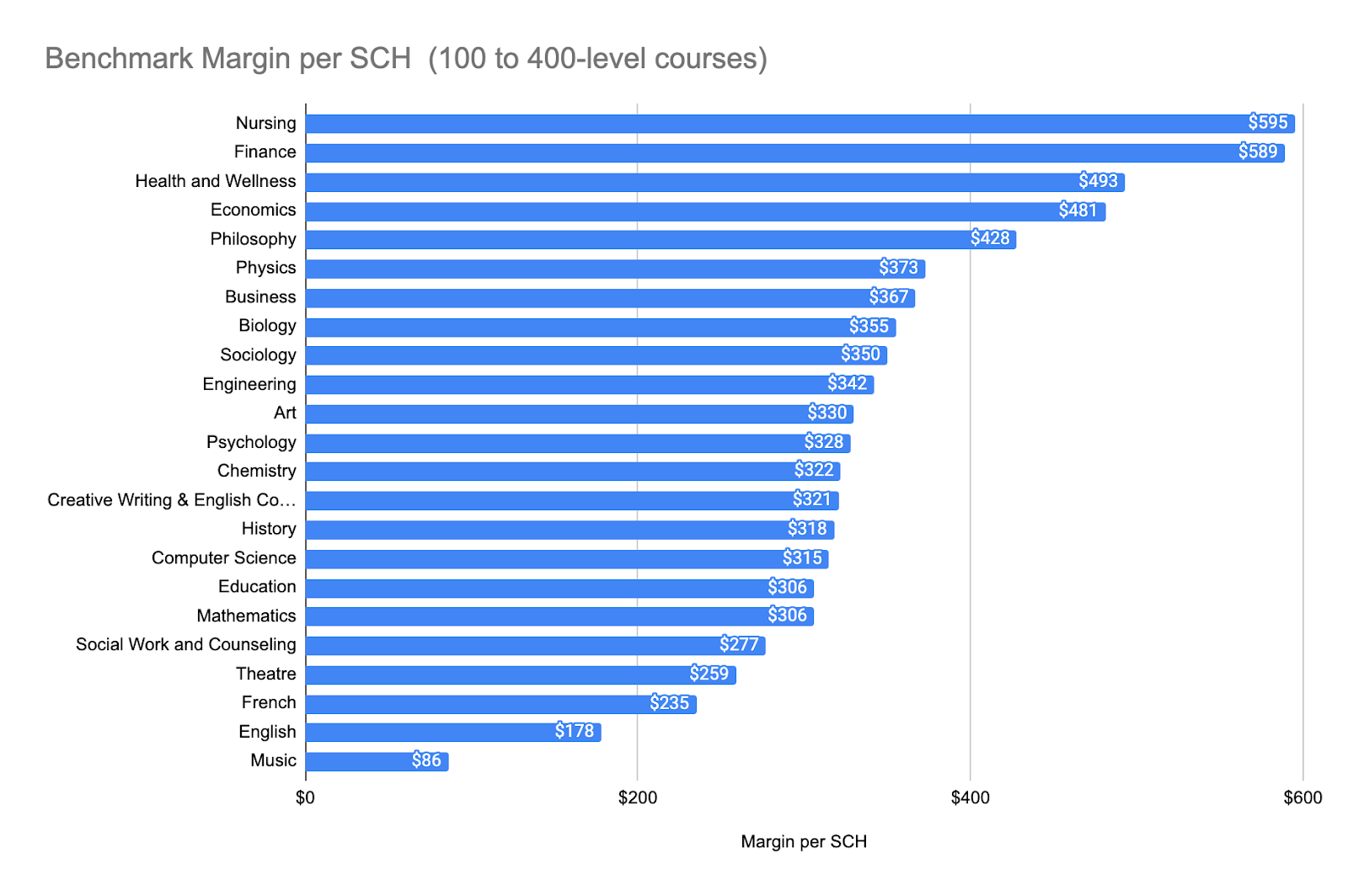 Overall, cost, margins, and size of discipline are not closely correlated, as illustrated below. To understand which programs are generating subsidies and which may be spending them, you need to pull faculty compensation data from payroll; tuition and discounts (scholarships) from the SIS; and faculty and student data on classes taught and or attended. With this data in hand, you can calculate the real revenue, cost, and margin by section, course, and discipline. Once you know the economics of your academic offerings, you will be in a much better position to invest in growth or address budget cuts–and avoid cuts that may end up costing more than they are worth. 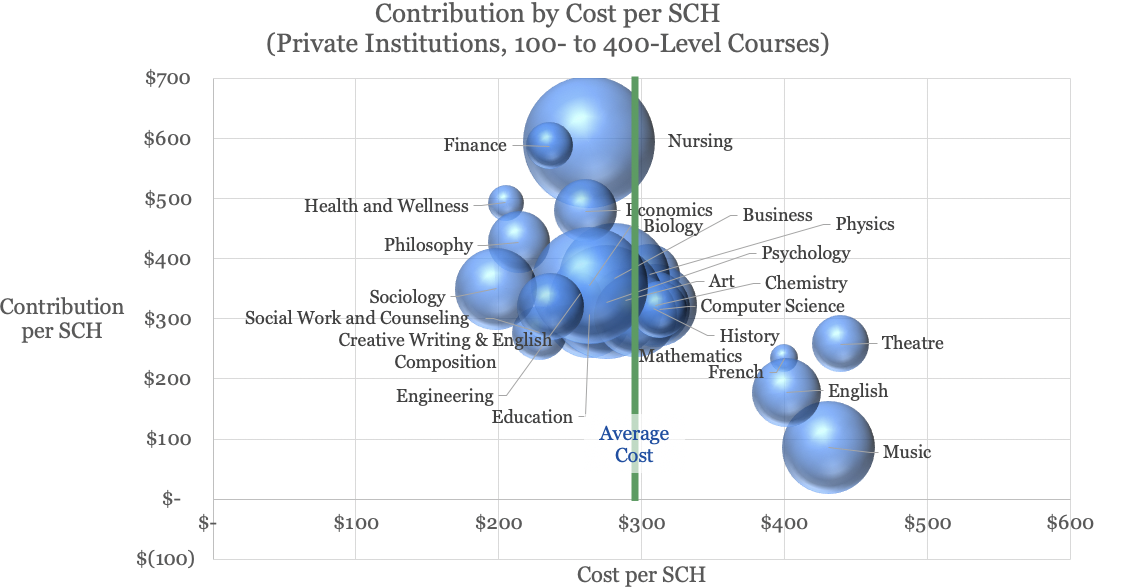 Note: Circle size is proportional to the number of student credit hours.