Catching up with Coddling part eight: Some big wins for free play and childhood independence

EDITOR’S NOTE: This is the eighth part of a multi-part series updating developments since the publication of “The Coddling of the American Mind: How Good Intentions and Bad Ideas are Setting up a Generation for Failure” (2018).

Earlier in this series:

In “The Coddling of the American Mind,” the fourth “causal thread” Jon Haidt and I identified to explain some unique and troubling trends within Generation Z (roughly those born between 1996 and 2016) was the diminishment of free play, unstructured time, and childhood independence. Unlike the previous entries in Catching Up With Coddling, which covered trends that have gotten worse, the movement for free play and childhood independence has seen success since COTAM was published, with new research, some helpful legislation, and, perhaps surprisingly, opportunities under COVID-19.

As readers of COTAM will remember, Free-Range Kids movement founder Lenore Skenazy and her great organization Let Grow figure prominently in our book. Let Grow was founded by Haidt, Skenazy, psychologist Peter Gray, and former FIRE board Chairman Daniel Shuchman to promote childhood independence. It gives parents and educators the tools (and confidence) to raise intrepid, resilient children, including research on the impact of loosening the reins, techniques to help parents do so, and information for lawmakers on the benefits of narrowing the neglect laws so parents don’t have to second-guess themselves when they feel their kids are ready for some freedom. Ryne interviewed Let Grow’s Lenore Skenazy and Diane Redleaf, its legal consultant, for this piece.

Research consistently shows that free play is necessary for brain development, and since COTAM came out, more research has come out in line with the findings we discussed in the book. A 2020 study in Hong Kong showed that unstructured free play and mindfulness techniques increased happiness and playfulness compared to a control group amongst children ages 4-6. A 2020 study in the UAE found that unstructured play over just three days reduced anxiety levels in 4-7 year-old hospitalized children as compared to a control group.

This February 2020 meta-analysis reviewed 16 different studies comparing nature play (free play in an outdoor setting) to more controlled, indoor environments. Across the studies, there is a strong indication that the outdoor play improved cognitive behaviors and creativity versus the indoor play, summarized in the chart below. 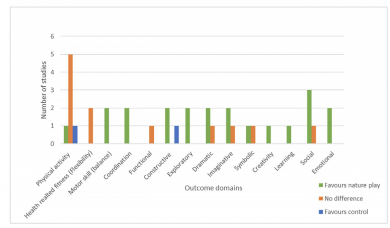 Most relevant is a 2020 study on an elementary school that implemented an expanded 40-minute recess and an hour-long before-school Let Grow Play Club, where students participate in unstructured free play in mixed age groups. An adult is there for emergencies, but they don’t organize the games or intervene in arguments. The researchers found that students in the Let Grow Play Club reported better moods and greater readiness to learn and focus in the classroom. They also made new friends. The teachers noted that the students in the Let Grow Play Club gradually stopped asking adults to solve their spats, as they began to do this themselves. This was a change the teachers hadn’t seen happen at traditional recess, which is generally shorter and with more active intervention from adults.

Let Grow and the movement for free range parenting

As we discussed in the book, it’s not just fear for children’s safety that prevents parents from “free-ranging.” Often that desire is trumped by the fear that they will be labelled as abusive or neglectful by other parents, or even reported to child protective services. Fortunately there is progress on that front. In 2018, Utah unanimously passed the “Free-Range Kids” law, which clarifies that it is not neglectful or abusive to allow children to play outside, run errands, or the like — things that can be critical to children growing into independent and functional adults.

Thanks to Let Grow, similar bills have been introduced in Colorado, Texas, Idaho, Nevada, Oklahoma, Arkansas, and South Carolina. These bills often receive bipartisan support. The South Carolina bill passed in the senate unanimously, and the Colorado bill, which was introduced by a Democrat and a Republican, passed in the house unanimously, and was expected to pass in the senate when senators were sent home due to COVID-19.

In the coming months and years, Let Grow’s Lenore Skenazy and Diane Redleaf are confident that many of these bills will become law, and that more states will take up the issue. Unfortunately, laws clarifying that free-range parenting is not neglectful remain necessary. As Diane explained to Ryne, states often have two separate sets of neglect laws — a criminal statute, and a law that regulates child protective services — and one or both of these can be extremely broad and ambiguous about what constitutes neglect. Here are the maps Let Grow commissioned showing every state’s neglect laws. Exacerbating the problem is that 18 states have passed universal mandated reporting laws, meaning ALL citizens are required to report any neglect they might notice — or face criminal liability for failure to do so. Unfortunately, this incentivizes people to turn in their neighbors for benign behavior and let CPS sort it out.

Challenges and opportunities under COVID

COVID-19 has been tough on everyone. Other than those who have lost employment or faced severe complications due to the disease, perhaps parents of young children have been the hardest hit — working from home while taking care of kids can feel like two simultaneous full-time jobs.

In some households, children are starting to pick up the slack. Lenore told Ryne about a mother in Virginia she had spoken to. Pre-COVID, this mom’s morning routine involved waking up, waking her 7-year-old, waking her 7-year-old AGAIN, dragging her out of bed, making the girl breakfast as she dawdled, and basically getting the nearly comatose kid out the door with seconds to spare. Not fun. But during the COVID-19 pandemic, with no more driving to school or commuting to work, the mother began sleeping later and later — and the girl started waking up earlier and earlier. She began to get her own breakfast. Then she’d get out a banana and yogurt for her mom, toast some bread, and butter it for her. The mother had no idea her kid was capable of doing these tasks, let alone that she’d take the initiative herself when given the opportunity. As Lenore likes to say, ironically “always helping kids is hurting them.” When the mom stepped back, her daughter stepped up.

Kids are like seeds. They need water to grow. For children, free time is that water

This situation mirrors the The Let Grow Project, a “homework” assignment that tells kids to “go home and do something new, on your own, without your parents.” This could be something like making a meal, walking to a friend’s home, climbing a tree, babysitting — the choices are endless. Even worried parents participate because it is a school assignment. And when they do, both generations change. When the kids come home bursting with pride thanks to doing something on their own, the ice of fear starts to crack. Parents start to see their kids as blossoming young men and women. The kids feel newly trusted and capable. And even extremely anxious students end up ready to leave their comfort zone. The Let Grow Project is free and takes almost no class time. Educators can download it here.

A survey by Let Grow of 1,600 parents and 1,600 children ages 8-13 across the socioeconomic spectrum showed that kids suddenly making their parents breakfast and discovering new independence wasn’t a freak occurrence — children adapted quickly and well to school closures early in COVID. Just take a look at some of the findings Dr. Peter Gray teased out:

While Ryne was surprised at the results, Lenore was not. “Kids are like seeds. They need water to grow. For children, free time is that water,” Lenore told me. Without after-school classes, sports, and extracurriculars, a lot of kids suddenly have more free time than ever. We can only hope that we’ll take these lessons and make some much-needed reforms to the schooling of young children.

Changing attitudes toward the over-policing of “neglect”

When I asked Diane and Lenore what changes they had seen on the ground since we released COTAM, Diane said that just as concerns about police brutality and over-policing of black Americans have found a wider audience, a skepticism of child protective services and the over-policing of neglect — which disproportionately affects black children — has grown in parallel.

That skepticism is overdue, as a whopping 7.8 million children per year are reported to child protective services. According to census data and the National Child Abuse and Neglect Data System Child Files (2003-2014), a staggering 37 percent of all children in America are expected to be reported at some point in their childhood to child protective services. Since COVID, calls into CPS have dropped by up to 50 percent, leading many to worry that this means children are now at much greater risk. But many experts disagree with them, and Lenore and Diane argue that this drop is mostly attributable to a decrease in the calls mandated reporters felt they had to make, even if they weren’t that worried about a child’s scrape, for instance, but had been instructed, “if you see something, say something.”

To those with money and little experience of need, poverty can be hard to distinguish from neglect. Unhelpfully, neglect laws often conflate the two. As a result, calls into CPS, and resulting penalties, fall more often on those at the low end of the socioeconomic spectrum. And because the socioeconomic spectrum is racialized, one would expect CPS penalties are racialized. And they are — that 37 percent of all children being reported to CPS statistic climbs to 53 percent when looking at just black children.

Awareness of over-policing neglect as a racial issue seems to be growing — The New York Times, for example, referred to the child removal system as The New Jane Crow. As reforms address racial injustice in the criminal justice system, I hope that similar reforms will come to reduce racial injustice, and injustice generally, in child protective services.

There are many reasons for optimism

After seven editions of Catching Up With Coddling updating trends that have gotten worse since the publication of the book, it is something of a breath of fresh air to cover free play and childhood independence, a trend that has shown signs of improvement in the last two years. There is a lot of work yet to be done, but progress is being made on a number of fronts, and I think there are reasons for optimism.

I want to thank Lenore Skenazy and Diane Redleaf for their help researching this piece, and for all of the important work Let Grow is doing on this issue. If you found any of this information interesting, please sign up for Let Grow, and receive updates on the latest developments on Free-Range parenting and childhood independence. Check out the Second Edition of Lenore’s book, “Free Range Kids,” which releases in June 2021! If you have a press query, or other question for Let Grow, just drop a line to info@LetGrow.com. And if you’d like to support its mission, they won’t stop you! You can donate here.