From Applying early decision to college is often a highly effective way to increase the odds of getting accepted at many colleges that offer this admission option.

Students and parents, who are interested in applying early decision or early action, need to know the advantages and disadvantages of this strategy. Here are things to consider:

1. Early Decision refers to the admission practice of allowing students to send in their applications and receive an admission verdict before teenagers who use the regular admission process.

2. The deadline for early decision applications can be November 15 or even earlier. In contrast, the application deadline for regular admission can be in January or later.

3. When students apply early decision to a college, they promise that they will attend if the institution accepts them. Colleges want you to believe that an ED acceptance is absolutely binding, but it can’t be.

5. In the 1990s, the University of Pennsylvania was the first school to offer early decision applications. Penn had too often been an also-ran for students aiming for Ivy League institutions so it rolled out the ED option to become more competitive.

1. Students who apply early enjoy greater admission odds at many schools because institutions want to improve their admission yield by locking up a portion of their class early. Doing so reduces the institutional stress regarding filling freshmen slots. The admission advantage can be considerable.

A fantastic resource for early decision, early action and regular decision acceptance rates is the website of College Transitions, which is a nationwide college consulting firm that has a depository of all sorts of handy college statistics and advice.

Here is a sampling from College Transitions of ED and regular decision (RD) admission statistics: 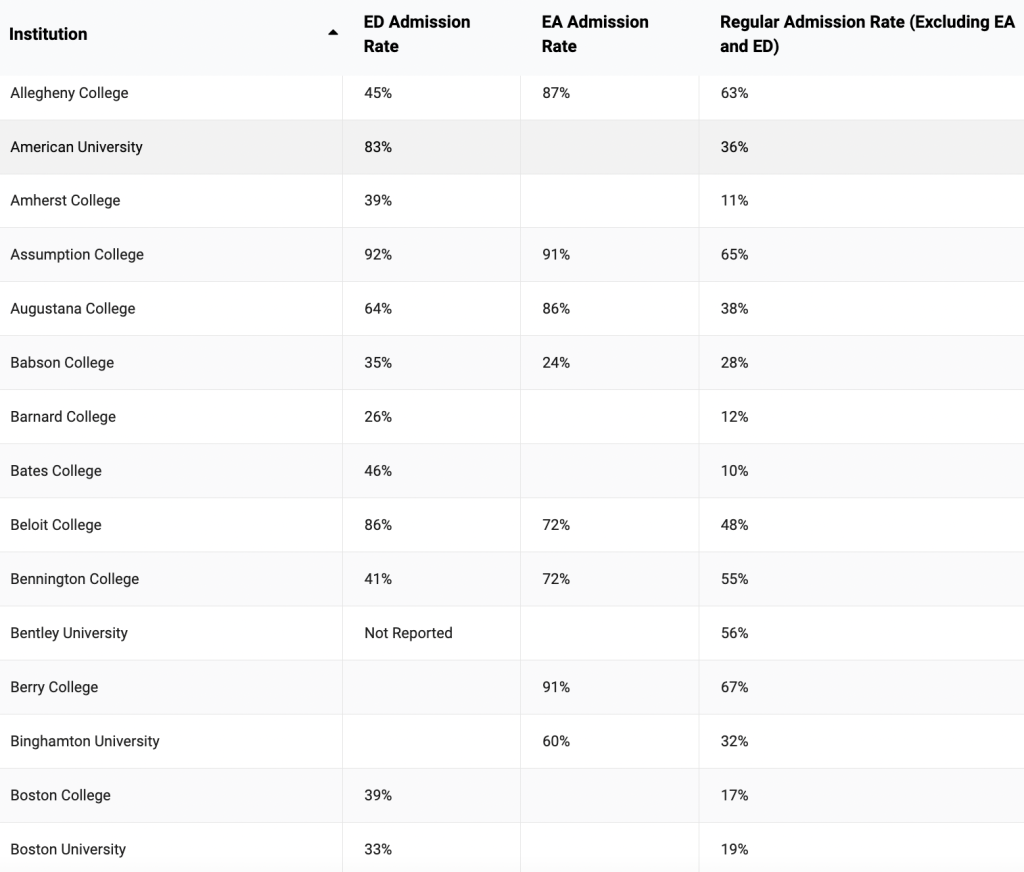 2. Students who apply early decision will be notified before other applicants of the school’s admission decision. Students will typically find out before the Christmas break whether they have been accepted or rejected. The admission verdict on some ED applicants, however, can be deferred to the regular decision cycle.

3. Getting an ED acceptance can be a boon for students who can quit the admission rat race after successfully applying to just one school.

4. Early decision can be an attractive option for students who are absolutely in love with an ED school and know that this is the college for them.

5. As more students treat applying to popular colleges as some sort of lottery, schools have worried about maintaining control of their admissions process. Consequently, a notable number of sought-after schools are using ED more heavily. This trend has only grown since the pandemic struck.

While families focus on the acceptance rate of ED applicants, it’s also important to know what percentage of a class was filled early. If a large percentage of freshmen are accepted via ED there won’t be many seats left during the regular round.

6. When money is an issue, families must absolutely use a college’s net price calculator before deciding to apply early decision!

Sampling of Colleges that rely heavily on Early Decision Admits

From College Transitions, here are some examples of popular colleges where a high percentage of their freshmen class were accepted via ED: 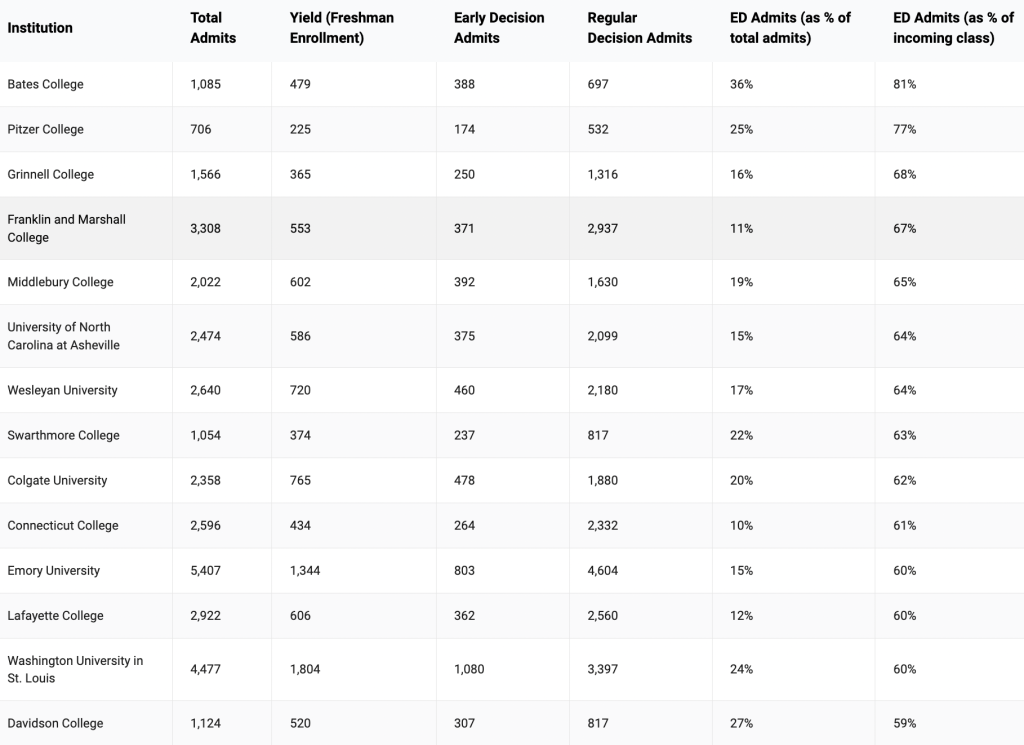 6. Students also have the option of Early Decision II. A growing number of schools offer a second ED round with the application deadline often on January 1. You could try this route if you didn’t get into your first ED school.

It’s also a way to boost admission chances if a student applied Early Action to other schools and isn’t excited about his/her choices. ED II could also be a smart option for students who need time to make their ED application stronger with first semester senior-year grades, test scores and additional accomplishments.

1. Applying early decision can be financially dangerous for students who need financial assistance. That’s because ED students must promise that they will attend the school regardless of what kind of need-based financial aid the school might provide. Not surprisingly, the chief complaint about ED is that it favors wealthy families who can cover the cost regardless of any help from the institution.

While students who apply early decision to a college must promise to attend the school, as a practical matter, a college can’t force an accepted student to attend. A family, however, should make every effort to talk with the admission/financial aid office if a financial aid award is inadequate. If you can’t swing it financially, you can walk away from an early decision acceptance.

2. Students who apply ED could also reduce their chances for merit scholarships, which are awarded regardless of financial need. Institutions won’t publicly admit to this, but it would only be natural for schools to give smaller merit awards or none at all to students who have committed to attending their institutions regardless of the price.

3. The ED route can be a poor choice for students who need grades from the first semester of senior year and/or better SAT/ACT scores to make them look more attractive to admission offices.

4. ED applicants, who lock in their choice early, can miss out on schools that offer better opportunities. A school that seems wonderful in October might not be the one an ED applicant likes in December or January when it’s too late.

5. While ED usually provides an admission advantage, it’s not guaranteed. At a minority of schools, the advantage can be quite small or nonexistent. For instance, at St. Joseph’s University, the ED acceptance rate was recently 69% versus 61% for regular decision. At Loyola Marymount University in Los Angeles, 42% of students applying early decision got acceptances, but 42% of the applicants waiting until the regular decision round were accepted. At St. Mary’s College , the ED acceptance rate is lower than the regular one (73%% vs. 82%).

You should use the College Transitions link to see what the the most recent ED and EA stats are for colleges and universities.

6. Favorable ED admission odds can be somewhat misleading. That’s because students applying ED can be stronger candidates than teenagers who apply later. Schools also tend to use the ED application process to accept recruited athletes, legacy applicants and others with a special skill.

7. The pandemic, which ushered in test-optional policies for the vast majority of state and private colleges, was a catalyst for many more students to apply ED.

Without having to submit test scores, ambitious students aimed for institutions that they normally wouldn’t have a chance of getting into. Early decision applications for MIT, for instance, jumped 62% after the school temporarily stopped requiring standardized test scores. At Yale and the University of Virginia, the increase was 38% while at Dartmouth and Rice, the ED applications rose 29% after the schools became test-optional.

More competition often led to higher rejection rates for the early birds at the most sought-after schools. The acceptance rates dropped even lower at the most highly rejective colleges.

8. With most schools keeping their test-optional policies, the increased popularity of ED for the most popular schools is continuing. 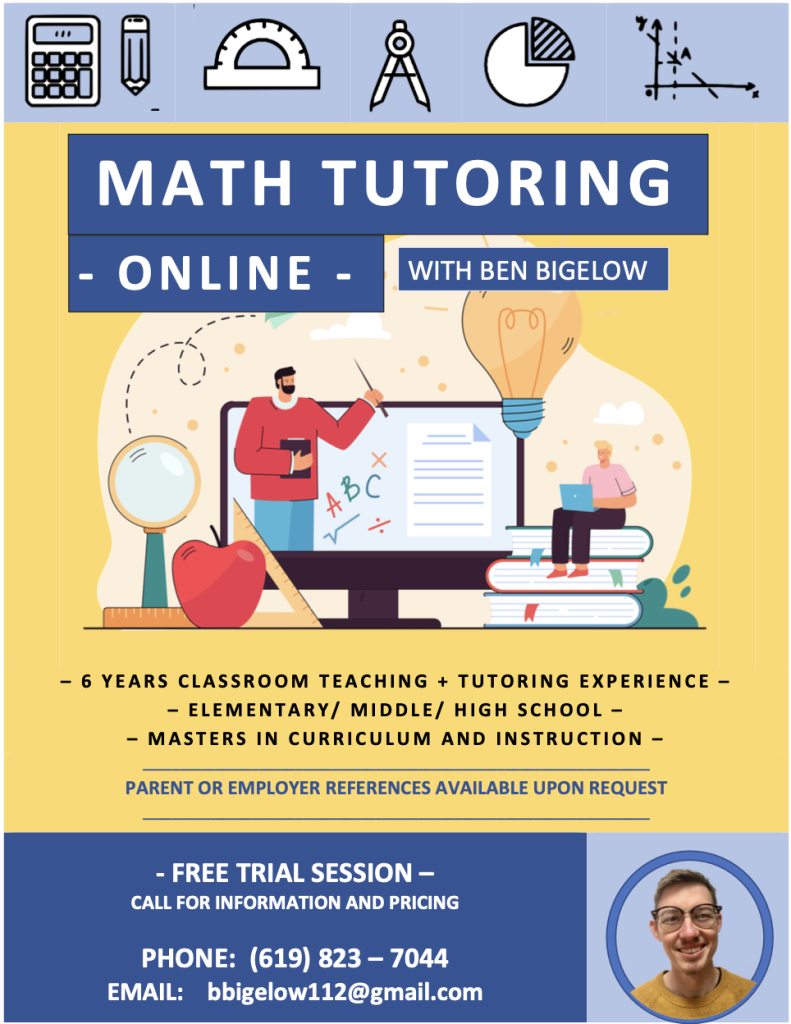 He’s not a marketer, but he’s a heck of a math teacher! He is offering one free session for parents who want to give him a try.

So if your child could use some math knowledge delivered by a kind, understanding, experienced math teacher, give Ben a try!