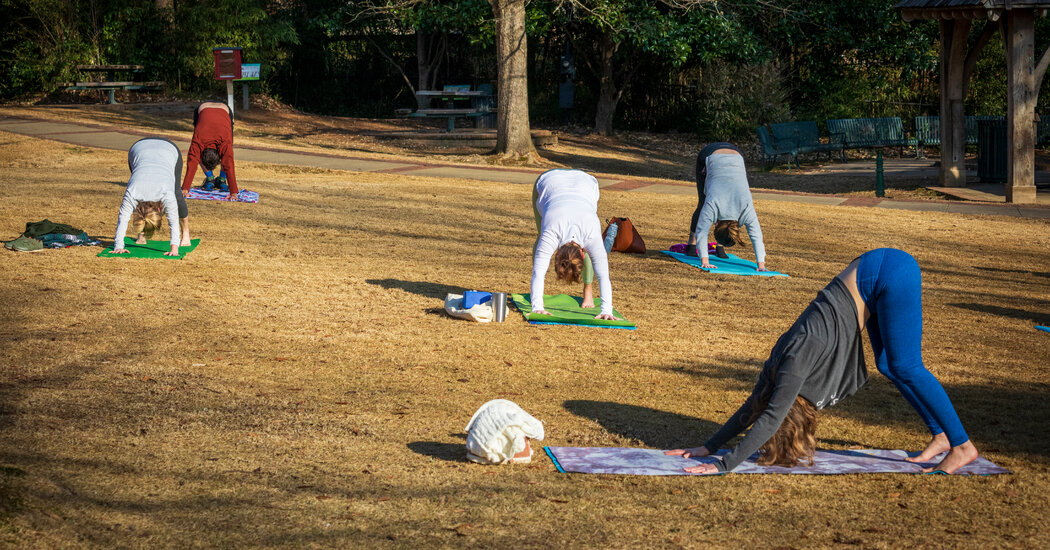 For the first time in nearly three decades, Alabama will allow yoga to be taught in its public schools, but the ancient practice will be missing some of its hallmarks: Teachers will be barred from saying the traditional salutation “namaste” and using Sanskrit names for poses.

Chanting is forbidden. And the sound of “om,” one of the most popular mantras associated with the practice, which combines breathing exercises and stretches, is a no-no.

The changes follow the signing of a bill on Thursday by Gov. Kay Ivey, a Republican, overriding a 1993 ban on yoga instruction in public schools by the state’s Board of Education. Some conservative groups had called for the prohibition to be preserved, contending that the practice of yoga is inseparable from Hinduism and Buddhism and amounted to a religious activity.

The measure, which takes effect on Aug. 1, gives local school boards the final say over whether to offer yoga to students from kindergarten through 12th grade. Participation in classes will be optional under the legislation, which was introduced by State Representative Jeremy Gray, a Democrat from Opelika, Ala., who was previously certified as a yoga instructor.

“With the evangelicals and this being a Bible state, they felt it was like a threat to Christianity,” Mr. Gray said of the ban’s supporters in an interview on Thursday. “Even 30 years later, you still have those same sentiments.”

A spokeswoman for Ms. Ivey confirmed in an email on Thursday that the governor had signed the bill, but declined to comment further.

The bill gained final approval by a vote of 75 to 14 in the House on Monday after previously passing in the State Senate. It included a number of amendments in the final language that Mr. Gray said reflected efforts by Republicans to play to their religious conservative base.

The amendments require parents to sign a permission slip for students to practice yoga. They also bar school personnel from using “hypnosis, the induction of a dissociative mental state, guided imagery, meditation or any aspect of Eastern philosophy.”

That, however, wasn’t enough to placate some opponents of teaching yoga in public schools.

The Rev. Clete Hux, the director of the Apologetics Resource Center in Birmingham, Ala., and a teacher at the Birmingham Theological Seminary, panned the bill in an online post one day before the final vote by lawmakers.

“Schools should not be in the position of endorsing possible altered states of consciousness,” Mr. Hux wrote. “Neither should the State Legislature risk violating the Establishment Clause of the 1st Amendment by promoting religion.”

Part of the language in the 1993 ban of yoga in public schools is preserved in some of the bill’s amendments. The ban was enacted after parents in the state raised concerns not only about yoga, but also about hypnotism and “psychotherapeutic techniques.”

According to an April 1993 article in The Anniston Star, one mother in Birmingham said her child had brought a relaxation tape home from school that made a boy “visibly high,” The Montgomery Advertiser reported.

Mr. Gray, 35, a former football player, said that he was forced to make concessions in the bill’s language for it to pass in the Legislature, where Republicans hold supermajorities in both the House and the Senate.

“Anyone who has taken yoga, we know that namaste is not something religious,” Mr. Gray said.

Two of the Republican state senators who Mr. Gray said played a role in altering the bill, Arthur Orr and Dan Roberts, did not immediately respond to requests for comment on Thursday.

So what would happen if a teacher let slip “namaste” or “om?” Mr. Gray said good luck trying to enforce the new rules.

“There’s no yoga police going around saying, ‘You can and cannot do this,’” he said.

In an email blast from the governor’s press office on Thursday announcing which bills Ms. Ivey had signed, including the one lifting the ban on yoga in schools, Ms. Ivey’s spokeswoman, Gina Maiola, had a Zen moment.

“Namaste,” she signed the email.