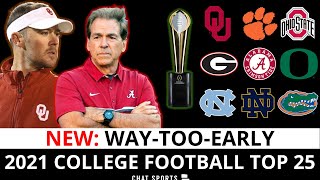 A way-too-early College Football Top 25 rankings for 2021 with the College Football National Championship in the books. Alabama beat Ohio State 52-24 in Monday night’s national title game, so will they open up as preseason #1 in the early 2021 rankings? College Football Now host Harrison Graham breaks down the Top 25 teams for 2021 on today’s video.

Alabama won their 6th National Championship since Nick Saban became head coach before the 2007 season by defeating Ohio State in Miami on Monday Night. Where will the Crimson Tide be ranked in 2021? Where will the Buckeyes start out in next year’s CFB Rankings? The Clemson Tigers and Oklahoma Sooners should challenge for preseason #1 as well.

There are always sleeper programs in college football and the same will be true next season. Will Cincinnati be preseason top 10 with Desmond Ridder and Luke Fickell returning in 2021? What will Coastal Carolina do next season as an encore after a spectacular year in 2020? Indiana, Arizona State and NC State are some other programs who could surprise as well.